After Rehab, a Return to Duty

On first appearance, Leon is a friendly fluff ball of a dog. Tail wagging, tongue out, the six-year-old German shepherd has a big smile set off by even larger ears covered in comically unruly tufts of hair.

But break the law and Leon’s good humor stops there. This specially trained canine officer can take down an assailant with great speed and force.

Leon is a dual purpose police dog with the Manitowoc County Sheriff’s Office who assists with drug detection, tracking of suspects or missing people, and other patrol duties such as apprehension and building searches. He’s been on the force for two years, handled by deputy sheriff Chris Hemauer.

Leon loves to work and he’s great at his job. But last summer, soreness in Leon’s hind legs sidelined him from duty.

“He kept limping and it wasn’t getting better, or it’d get better and then it would occur again,” Hemauer says. Even with treatment, the issue persisted. “It didn’t seem like we were nipping his problem in the bud.”

In May, in search of a remedy, Hemauer and Leon traveled to UW Veterinary Care (UWVC), the teaching hospital of the UW School of Veterinary Medicine. The hospital’s robust diagnostics and veterinary specialists prompted Hemauer to make the trip.

“With all the technology and the doctors, anything you need you can get it here,” he says. “You’re going to get the best of the best.”

Hemauer was also motivated by the credited and discounted services that UW Veterinary Care offers for police K-9 units in Wisconsin.

In 2016, UWVC launched a statewide K-9 health effort to make care even more accessible to police dogs and their departments. Law enforcement agencies in Dane County — UWVC’s primary service area — were offered $5,000 in credit for veterinary services at regular rates and a 50 percent discount on any service beyond that for each calendar year. Agencies outside of Dane County were offered a 50 percent discount. To date, 57 law enforcement agencies throughout the state have taken advantage of this offer by signing agreements for care with UWVC.

“The price difference definitely helps out,” says Hemauer. “In any business, you’re trying to save money as best as you can.”

In Leon’s case, an orthopedic exam at UW Veterinary Care revealed that injured hip flexor muscles were the likely cause of his lameness. His care team ordered eight weeks of reduced activity to aid recovery and referred Leon to Courtney Arnoldy, the hospital’s physical rehabilitation specialist.

Over five sessions last summer, Arnoldy guided Leon and Hemauer through massage and stretching techniques, followed by a variety of gradually intensifying exercises, aimed at strengthening Leon’s hip flexors and other surrounding muscles. With treats offered abundantly for encouragement, Leon would hold steady on a balance board, stand with his back or front legs elevated, step up and down from or over various obstacles, and navigate a ramp or stairs. Between visits, Hemauer continued the routine at home with Leon. Improvement came quickly.

“The different exercises are definitely benefiting him,” Hemauer said at Leon’s second rehabilitation appointment with Arnoldy in June. “His gait is a lot better than it was.”

Arnoldy also showed Hemauer proactive ways he could help Leon prevent future muscle strain. “She’s given me a lot of great ideas,” Hemauer says. “These exercises are something we’re going to be doing the rest of his career to keep him going.”

Leon’s symptoms have resolved and in late July he returned to his full range of police work. One of two K-9s with Manitowoc County, Hemauer says these dogs protect the safety of officers and the community in a variety of ways. Sometimes, their mere presence is enough of a persuasion.

“There have been numerous times that I’ve been in a high-speed pursuit and the driver gave up right away and told me after that if the dog wasn’t there, he was going to run,” Hemauer says. “Or the passenger ran, heard the dog, and came back because of the dog. There’s a pretty big intimidation factor.”

Major Jason Orth, who leads the Manitowoc County Sheriff’s Office Operations Division, says the office is grateful for the expertise and quality of service that UWVC provided to Leon.

But the pair’s work isn’t “just catching bad guys and taking people to jail,” Hemauer notes. Leon has also helped to locate elderly people with memory loss who have wandered from home and he has tracked and found lost individuals in the woods. “There’s no other technology out there that’s as good as the dog’s nose. They’re incredible.”

“Our K-9s are involved in vigorous tasks and it’s disheartening when we see them get injured,” he says. “It’s great that the team was able to help Leon get ‘back on the street.’”

For Arnoldy, it’s a special honor to be part of the medical care team working closely with officers and police K-9s.

“These officers and their dogs have an amazing relationship and respect for one another, not only as partners but as family members,” she says. “The motivation and commitment to the rehab plan allows for an improvement in comfort and mobility with the goal of a safe return to duty. We are all so grateful for their service.”

Arnoldy has also provided rehab services to three other police dogs in the past few years: Franz and Friday of the Winnebago County and Racine County Sheriff’s Offices, respectively, and Sam of the Fond du Lac Police Department, with all returning to duty.

This story was originally written by Meghan Lepisto and published on the School of Veterinary Medicine website. 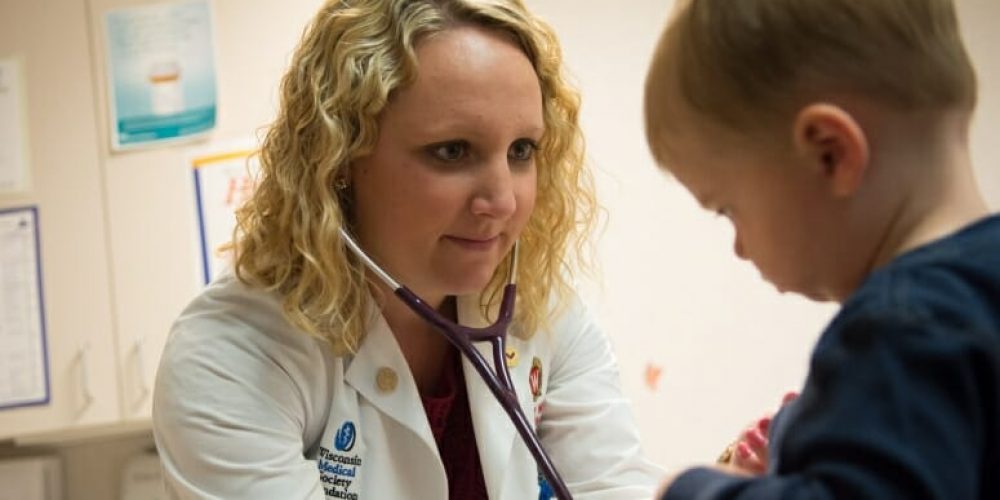