The Bucky’s Tuition Promise recipients in this fall’s cohort at UW–Madison come from nearly every corner of Wisconsin.

The 937 new freshmen and transfer students represent 66 of our 72 counties — from Douglas to Ozaukee, Pierce to Door, Polk to Grant. Seventy-four percent of them live outside Milwaukee and Madison, Wisconsin’s two largest cities. 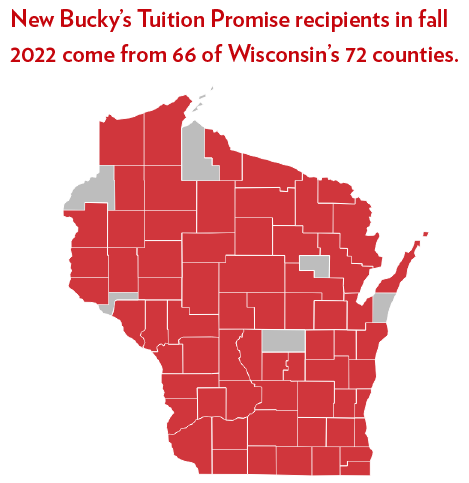 “Bucky’s Tuition Promise is one of the most powerful ways we make sure that Wisconsin resident students from lower- to moderate-income families can afford the state’s flagship university,” says Helen Faith, director of student financial aid. “We love that these talented Wisconsin students chose UW–Madison, and we love hearing their stories.”

Bucky’s Tuition Promise is available only to students from Wisconsin. It guarantees scholarships and grants to cover tuition and segregated fees for Wisconsin resident students who are accepted to UW–Madison and whose annual household adjusted income is $60,000 or less. Incoming freshmen receive four years of tuition, transfer students two years. The threshold for eligibility is set so that roughly half of all households in the state qualify.

Now in its fifth year, Bucky’s Tuition Promise has been awarded to a total of 4,888 students. The first full class of recipients graduated in May 2022. Currently, there are 3,297 students on campus this semester receiving the guarantee.

Bucky’s Tuition Promise is funded through the generosity of private donors, many of whom are alumni, and other institutional resources, such as revenue from Bucky-branded merchandise. No taxpayer dollars are used. 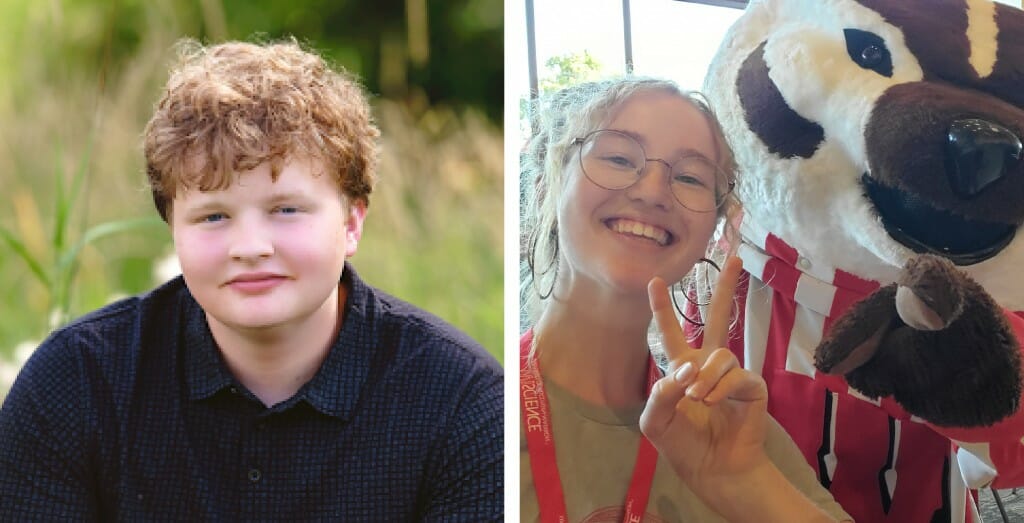 For freshman Andrew Ramthun and his family, the 2008 recession hit hard. Both parents lost their jobs, and the bank foreclosed on their home. To save for college, Ramthun worked part-time jobs throughout high school — waiter, customer service representative, cashier. He socked away $11,000 but knew that wouldn’t go far. Bucky’s Tuition Promise arrived unexpectedly and wondrously.

“I don’t think it’s totally sunk in yet,” says Ramthun, of Waupun. “It makes focusing on school significantly easier because, knowing myself, I already would have been worrying about money.”

At Waupun High School, Ramthun helped found the robotics team and served as secretary of the school’s National Honor Society chapter. He hopes to become a data scientist.

Sawyer Wisniewski learned about Bucky’s Tuition Promise four years ago as a freshman at Gibraltar High School. “My school counselor pulled me aside and said, ‘I know you’re looking at attending UW–Madison. Here’s something they have that could help you.’”

The information came as a huge relief. In fourth grade, Wisniewski’s teacher had the class research college costs. It was eye-opening. “I knew I’d need to pay my own way, so I started a savings account at 14,” says Wisniewski, of Baileys Harbor.

She’s majoring in global health and hopes to become a researcher whose work improves the lives of others.

Chelsea Roberts, the school counselor who pulled Wisniewski aside, says the cost of college tuition can be a huge stressor for many potential college students, especially those from families living paycheck to paycheck.

“Bucky’s Tuition Promise is allowing some of our brightest youth to achieve dreams that otherwise may have been out of their reach, and it will make a difference not only in their lives but in the lives of others as well,” Roberts says. “Our youth are our future, and if Bucky’s Tuition Promise can help young aspiring students like Sawyer, our future is in better hands.”

The median adjusted gross household income for this year’s cohort of Bucky’s Tuition Promise recipients is $35,000.

Herheim, who hopes to become an astrophysicist, says she received acceptance letters from multiple universities. However, even with generous financial aid packages, she says the other colleges would have expected her to contribute from $20,000 to $70,000 of her own money each year. Bucky’s Tuition Promise will likely allow her to achieve one of her undergraduate goals, to enter graduate school without any student debt.

Bucky’s Tuition Promise recipient Jasmine Phung, a freshman from Oak Creek, says many young people have dreams that they can’t pursue because they don’t have the money.

“But you can’t make money until you pursue some of these steps,” Phung says. “Getting a college education often is one of them.”

Her parents, both immigrants from Vietnam, impressed upon her the importance of working hard in high school. She was president of her school’s peer tutoring club and math club. She was elected vice president of her senior class of 550 students and was a member of the Oak Creek High School National Honor Society chapter. She aspires to be a high school math teacher.

D’Marion Jackson isn’t sure what he’s going to major in yet, but he says UW–Madison ranks high in many of the majors he’s interested in — an important consideration for him.

“It’s great to be at a big university with a lot going on, but for me, the student life stuff does not come above the academics,” says Jackson, a freshman Bucky’s Tuition Promise recipient from Racine. “Financial aid also was really important — in fact the No. 1 thing. UW–Madison offered me a very good deal to come here.”

‘This can’t be real’ 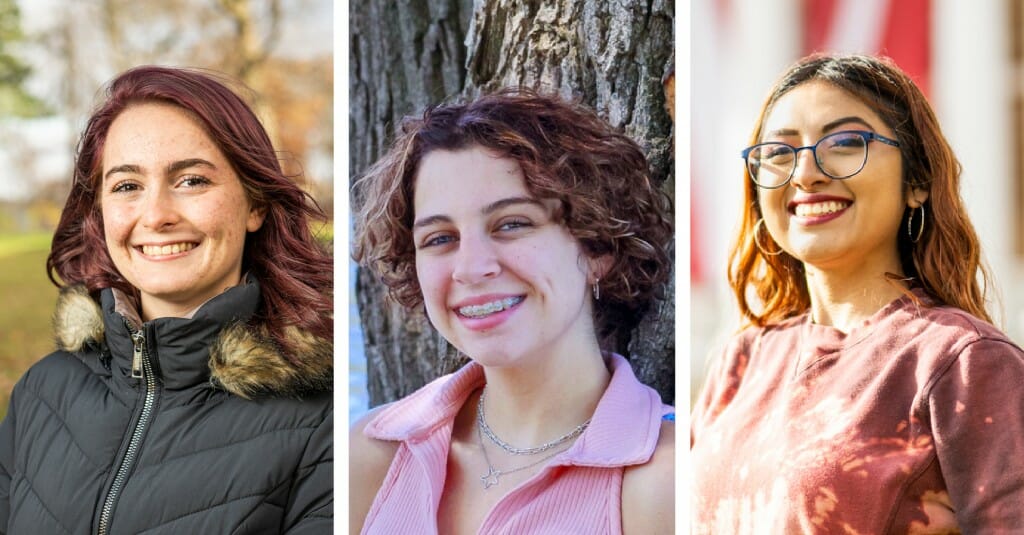 Qualifying for Bucky’s Tuition Promise is straightforward and simple. It is based solely on one line from a family’s federal tax return, and it is awarded automatically to eligible Wisconsin resident students who have completed the Free Application for Federal Student Aid (FAFSA).

There is no separate application; the Office of Student Financial Aid simply notifies students of the award.

Faith Demerath, a freshman from Neenah, waited a full day to tell anyone she’d received Bucky’s Tuition Promise, thinking she’d dreamt it. “It was shocking and exciting,” she says. She has wanted to attend UW–Madison since sixth grade and is majoring in legal studies.

Stella Harder, a freshman from Wausau, thought it was a joke at first.

“I didn’t know Bucky’s Tuition Promise was even a thing until I got the notification,” she says. “I thought maybe I’d get a little bit of a break, but then it said my tuition would be zero. I showed it to my mom and said, ‘This can’t be real, right?’”

Harder says her father, a school bus driver, was sidelined during the pandemic, complicating family finances.

“I’ve been working since I was 13, and I studied my butt off in high school,” says Harder, who is pursuing interior architecture. “As somebody who has always had to be financially cautious, Bucky’s Tuition Promise is a huge weight off my shoulders.”

Joanna Hernandez calls UW–Madison her dream school. Raised mostly in Mexico, she now lives in Madison with her father, a factory worker. Her mother remains in Mexico.

“Even though everything was against me, including my language, I’m very proud that I got into such a prestigious school,” says Hernandez, who hopes to become a child psychologist. “My family has always viewed UW–Madison as one of the best schools in the world. Bucky’s Tuition Promise pretty much made my dream come true.”

For more information on Bucky’s Tuition Promise, please go to financialaid.wisc.edu/types-of-aid/tuition-promise/ or call the UW–Madison Office of Student Financial Aid at (608) 262-3060. To help support the initiative, visit supportuw.org/giveto/btp. 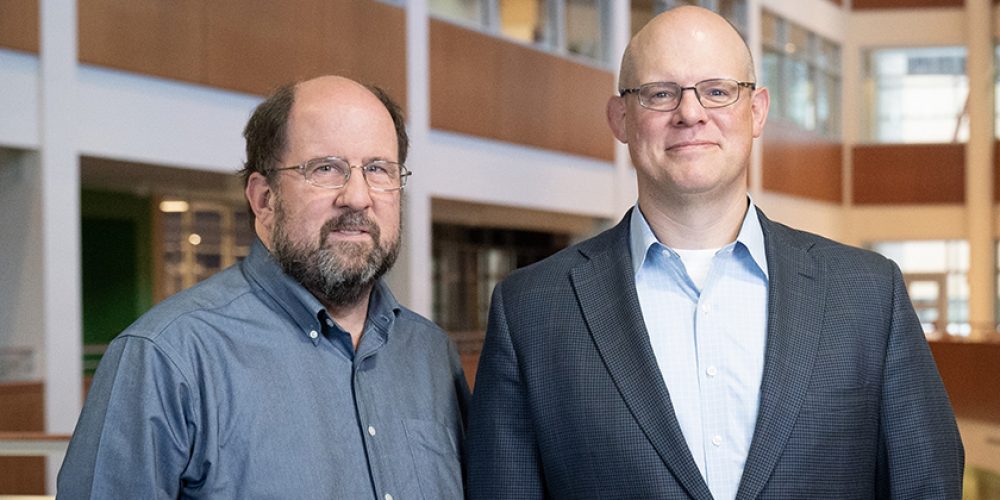